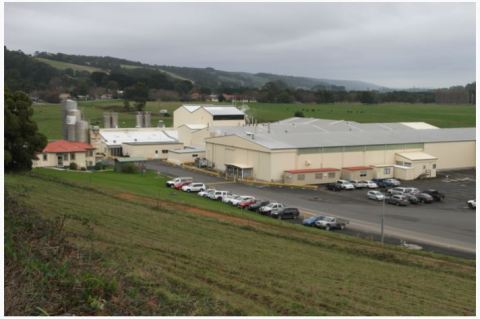 Photo: Murray Goulburn’s board will meet on October 16 to discuss any offers on the table. (ABC Rural: Sally Dakis)
The pressure is on for Australia’s biggest dairy processor Murray Goulburn to find a buyer for its Edith Creek milk processing plant before it closes down next month.

Embattled milk processor Murray Goulburn has confirmed it has begun a process to sell the plant in north-west Tasmania, due to close on November 30.

Consequently, 120 people will be out of a job if a buyer is not found before the closure.

Prospective buyers have toured the factory in the last week and the ABC understands at least two international buyers have expressed interest.

It is also understood Murray Goulburn’s board will meet on October 16 to discuss any offers on the table.

With the clock ticking on Murray Goulburn’s Edith Creek plant, uncertainty hangs over the townsfolk of Smithton.

The National Union of Workers (NUW) held a meeting on Saturday at Smithton, attended by workers, politicians and community members.

“Getting that sale happening fairly and soon means that we can have a whole bunch of workers, their families and the entire Edith Creek and Circular Head communities, having certainty before Christmas and knowing there are a lot of jobs to come back to,” he said.

The sale of the Edith Creek site comes as a number of dairy groups, including New Zealand-owned dairy giant Fonterra, bid for Murray Goulburn.

Mr Moase said it was crucial to finalise the sale of the Edith Creek site before any takeover of the broader Murray Goulburn company.

“Maybe they [the new owners of Murray Goulburn] will sell it, maybe they won’t, maybe they’ll mothball it,” he said.

He said those who attended the meeting at Smithton voted in favour of circulating a petition to urge Murray Goulburn to sell Edith Creek site for a fair price.

Forget dollar a litre milk. The dairy crisis has more to do with global trade wars than it does with cheap supermarket milk.

“I think Murray Goulburn will sell the factory at fair value if they know there is a united, bipartisan, deep community sentiment about it,” he said.

“Absolute best case scenario would be, a sale goes through as soon as possible, we get all the information we need, and they would reopen as quickly as the could,” he said.

Labor Member for Braddon Shane Broad attended the meeting and said the Opposition would consider offering incentives to any buyer serious about staying in the area long-term.

“We would consider some options like payroll tax relief and or stamp duty relief, to get them over the line if necessary,” he said.

Mr Broad said he believed the dairy industry had a strong future in Tasmania.

In a statement, Braddon MP Joan Rylah said she and the Premier would write to Murray Goulburn in the next 10 days, expressing their strong wish the sale of the factory is completed as a matter of urgency.

A spokesman for Murray Goulburn said in a statement the key focus when considering options for the site was to maximise value to the company and its stakeholders.

He said the company is committed to providing affected employees with appropriate levels of support.