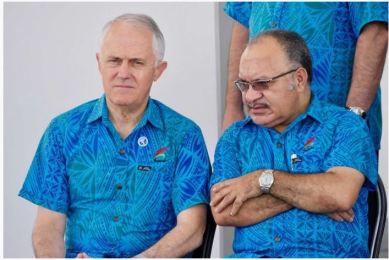 Prime Minister Malcolm Turnbull has told a gathering of Pacific leaders he is delivering on his promise to “step up” Australia’s engagement within the region.

To back up the promise, Mr Turnbull announced several new initiatives at the Pacific Islands Forum in Apia, Samoa.

A new Pacific Labour Scheme will allow 3,000 people from Nauru, Kiribati and Tuvalu to work in rural and regional parts of Australia for up to three years.

“This initiative builds on the very successful and long-standing Seasonal Worker Program, which itself will be streamlined to support Australian employers and Pacific Island workers to access the program more effectively,” Mr Turnbull said.

In the area of security, Mr Turnbull announced Australia would fund a new aerial surveillance mission to crack down on illegal fishing.

“Flights are expected to commence before the end of the year and will also be able to assist in addressing issues such as transnational crime and people-smuggling,” he said.

“This will position the region better to address threats such as people-smuggling, transnational organised crime, cyber attacks and major disease outbreaks,” he said.

Posted on September 10, 2017, in ConspiracyOz Posts. Bookmark the permalink. 2 Comments.