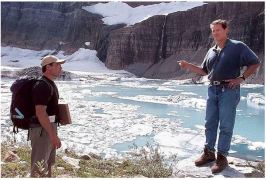 You must swallow whole the apocalyptic vision he presents – or else

The subtitle of Al Gore’s new film is ‘Truth to Power’, which is supposed to give the impression of brave old Al fighting for right against the mighty fossil fuel establishment. But it is somewhat ironic, given his response when the power being challenged is Gore himself. The former vice president was in London last week to promote his new film and I, along with the world’s press, was invited to a private screening before being allotted an entire eight minutes talking with the great man.

An Inconvenient Sequel is an odd film. Billed as a film about global warming, it is really about Gore himself. It starts with him plodding around on a glacier in Greenland, but much of its running time is devoted to scenes which really have nothing to do with the subject — other, perhaps, than that they depict a lifestyle somewhat at odds with a man preaching the need to cut carbon emissions. Gore is seen driving a large Jeep to visit his childhood home, and jetting off around the world. As for the scenes of his failed presidential campaign in 2000 and the Bataclan massacre in Paris in 2015, I fail to see what they have to do with climate change.

But one scene catches my eye and makes me want to look into the subject more deeply. The film cuts from Gore on his melting glacier to a flooded street in Miami Beach, with a voiceover from Gore making a strong connection between the two — the melt-water from Greenland is already spilling over the streets of US cities. An elderly Miami resident is seen telling Gore that the streets never used to flood when he was young. The implication is that sea-level rise is happening frighteningly quickly — and it is all down to carbon emissions, if not nature’s revenge for all those hanging chads which denied him victory in Florida and therefore the 2000 presidential election.

It caught my eye because it reminded me of an issue of accuracy which Gore encountered with his first film, An Inconvenient Truth, in 2006. In a High Court ruling over whether the film could be shown in schools, Mr Justice Barton ruled that while it was ‘broadly accurate’, it contained nine ‘significant errors’. One of them concerned a claim that sea levels could rise by 20 feet in the near future due to the melting of ice in Greenland or the west Antarctica ice sheet — something the judge ruled to be ‘distinctly alarmist’. Another involved a false claim that residents of Pacific atolls had already been forced to evacuate to New Zealand due to sea-level rise.

Not being a climate scientist, the threat of sea-level rise is not something on which I feel qualified to propound, but I wasn’t going to take Gore’s word for it — not least because he is no more a climate scientist than I am. So I got in touch with Shimon Wdowinski, associate professor of marine geology and geophysics at the Florida International University, who has studied the flooding problem in Miami — exactly the sort of expert, one might think, with whom Gore or his team of researchers might have been in touch before making a documentary film involving the issue of flooding in Miami.

Wdowinski — who said that he had had no contact with Gore or his team — did not refute the connection between sea-level rise and glacier melt, but suggested it is more complex than Gore’s film makes out. Over the past decade and a half, sea levels in Miami and along the rest of the eastern seaboard of the United States, have taken an upwards jolt and are currently rising by between 6mm and 9mm a year. However, the long-term rise in sea levels — caused by a combination of melting ice and thermal expansion of the oceans — is only 2mm. The rest is short-term variability caused by changes in ocean currents. Interestingly, there may be some link between meltwater from Greenland and the change in ocean currents — Wdowinski has identified a similar short-term uplift in the rate of sea-level rise in Florida in the 1940s, when temperatures in Greenland saw a temporary upwards blip and were as high as they are now. But these findings he describes as only ‘preliminary’. He has also investigated another factor behind flooding in Miami — subsidence in parts of the city which are built on reclaimed swamps. Satellite measurements reveal that some streets now lie 16 to 24cm lower than they did 80 years ago — which might explain why long-established residents are seeing places flood which never used to flood when they were young.

When I put all this to Al Gore and ask him whether his film would be stronger if it acknowledged the complexities of sea level rise — why it is rising in some places and not in others — I am expecting him to bat it away, saying that it doesn’t counter his central point and that there is a limit to what you can put into a film pitched at a mass audience, but his reaction surprises me. As soon as I mention Professor Wdowinski’s name, he counters: ‘Never heard of him — is he a denier?’ Then, as I continue to make the point, he starts to answer before directing it at me: ‘Are you a denier?’ When I say I am sure that climate change is a problem, but how big a one I don’t know, he jumps in: ‘You are a denier.’

That is a strange interpretation of the word ‘deny’, I try to say. But his PR team moves in and declares ‘Time’s up’, and I am left feeling like the guy in Monty Python who paid for a five-minute argument and was allowed only 30 seconds. On the way out, a frosty PR woman says to me: ‘Can I have a word with you?’ I wasn’t supposed to ask difficult questions, she says, because ‘this is a film junket, to promote the film’.

Surely if you are going to make a film claiming climate change to be a grave threat to the world, you ought to be prepared to answer detailed questions about it.

If you are reading this, Al, the questions I didn’t get to ask you were: you don’t like it, for good reason, when oil companies weigh in on climate change, so don’t you think you are yourself open to charges of vested interests given that you set up and are still involved in Generation Investment Management, a fund which invests heavily in green energy?

And secondly: you have described climate change as a ‘moral challenge’ which can be ‘reduced to a binary choice’. Doesn’t that remind you a bit of your nemesis, George W. Bush, saying, after the 9/11 attacks: ‘You are either with me or with the terrorists’? Doesn’t climate change present a wide range of policy choices, involving an awkward trade-off between reducing carbon emissions and economic growth?

Most people, to a greater or lesser extent, accept that carbon emissions are a problem which must be addressed. But with Al Gore there is no room for any uncertainties — you swallow whole the apocalyptic vision in his films or you are a ‘denier’. He and his ‘climate ambassadors’ whom he has trained to spread his message resemble a charismatic church whose leader must be paid constant homage. He is an obstacle to serious debate. 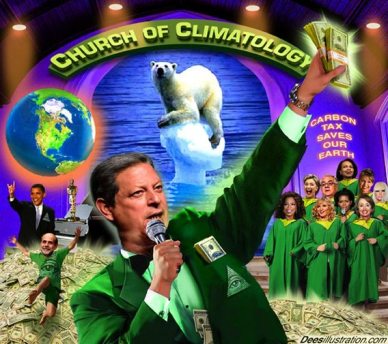 Posted on August 18, 2017, in ConspiracyOz Posts. Bookmark the permalink. Leave a comment.