A total 476 police officers were injured during the G20 riots in Hamburg last week and nowpolitical leaders across Germany have vowed to take better steps to identify and combat left wing terrorism.

The riots in Hamburg, which lasted for several days, saw the city lit on fire and police officers from all over Germany injured by far-left extremists. The riot led to large-scale condemnation from many political leaders and calls for the Social Democrat (SPD) Mayor of Hamburg Olaf Scholz to resign, Der Spiegel reports.

The leader of the SPD and former European Parliament President Martin Schulz said the rioters’ actions displayed “the characteristics of terrorism”. CNN called the protests “eclectic” and “international”. 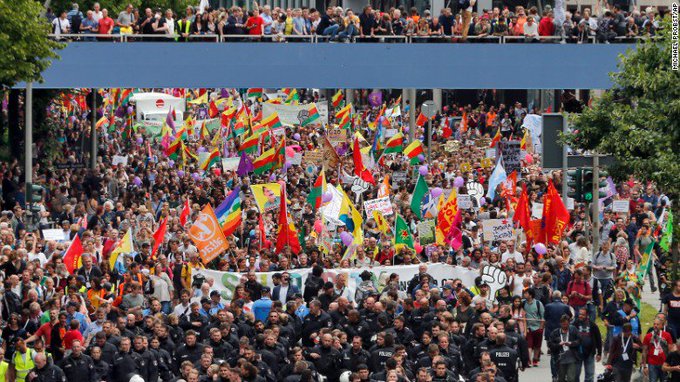 An eclectic and international mix of demonstrators peacefully flooded the streets of Hamburg as G20 wraps up http://cnn.it/2u389es

“Such small-minded skirmishes are the business of people who took a whole city hostage for their dimwittedness in an almost terrorist manner,” Schulz added.

Justice Minister Heiko Maas, also of the SPD, said that future political summits should not be held in German cities. This was countered by Interior Minister Thomas de Maizière of Chancellor Angela Merkel’s Christian Democratic Union (CDU) who said: “We will not allow a group of radical violators to determine whether, when, and where heads of state and government come together.”

Mr. Maas also demanded better information sharing in Europe regarding far-left extremists. “The brutal riot tourists stop at no borders. A high proportion of the violent extremists travelled to the G-20 from other European countries,” he said adding: “We experienced a new quality of violence, which we should react to with more cooperation in combating extremists.”

Shortly before the riots, police had warned they expected left-extremists to come to Hamburg from all across Europe.

President of the Federal Police, Dieter Romann, said the violence during the riots was on a scale not predicted by authorities. Police say 186 people were arrested and remain in custody whilst another 225 were initially arrested but then released shortly after.

Hamburg Senator Andy Grote of the SPD said the main problem was the presence of the protest camp in the district of Altona which he claimed had led to the violence. Days before the riot, police had attempted to clear the unauthorised protest camp using a water cannon and pepper spray on protestors leaving five of them injured.

Residents who were affected by the rioting will receive compensation from the government, and police have already sent out officers giving residents and business owners information on how they can file a claim for damages.

Posted on July 14, 2017, in ConspiracyOz Posts. Bookmark the permalink. Leave a comment.