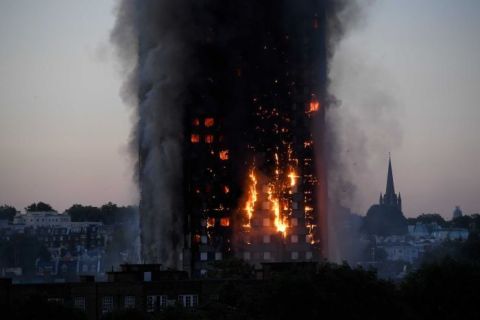 Photo: Police said they were considering manslaughter among the possible criminal offences that may have been committed. (Reuters: Toby Melville)

London police have confirmed they are considering manslaughter charges in relation to a deadly apartment block fire that killed at least 79 people just over a week ago.

The final death toll from the blaze which engulfed the 24-storey Grenfell Tower has not been determined, and authorities have warned it may never be known how many people died.

“Given the deaths of so many people we are considering manslaughter as well as criminal offences and breaches of legislation and regulations,” Police Detective Superintendent Fiona McCormack said during a press conference.

How did the fire spread so quickly?

And how can landlords and local councils act now to help prevent another disaster?

Superintendent McCormack also confirmed the fire started in a refrigerator unit, and that cladding on the building failed all safety tests.

“We now have expert evidence that the fire was not started deliberately,” she said.

The fridge — a Hotpoint model FF175BP — was not subject to recall and the manufacturer was doing further tests, Superintendent McCormack said.

Britain ordered an immediate technical examination of the Hotpoint fridge model, manufactured between 2006 and 2009, to establish whether further action needed to be taken, but said there was no need for owners to switch off their appliances

Whirlpool Corp, the world’s largest maker of home appliances, owns the Hotpoint brand in the Europe and Asia Pacific regions. In the United States, the brand now belongs to Haier.

Whirpool said in a statement it was working with the authorities “to obtain access to the appliance so that we can assist with the ongoing investigations”.

When speaking about the 79 people dead, presumed dead or missing, Superintendent McCormack said, “I fear that there are more”.

“What we haven’t got is a picture of how many people might have been in there. That’s the number I’m really worried about.”

Similar cladding used in at least 11 other towers

The blaze, Britain’s worst since WWII, has heaped pressure on Prime Minister Theresa May, already fighting for her political survival after her party lost its parliamentary majority in a snap election on June 8.

Ms May has encouraged the owners, both public and private, of tower blocks around the country to quickly forward samples of any similar material for testing.

She said the Government would work with local authorities to make sure any dangerous material is removed and residents are safe, she said.

Londoners who watched the inferno tear through a high-rise tower block in West London describe seeing people trapped in the building screaming for help as burning debris rained down.

Buildings in London, Manchester and Plymouth are among those where problem cladding has been identified.

Fears about cladding are not limited to apartment buildings, at least one hotel chain is calling in experts to make certain it meets safety regulations.

Premier Inn said it had “concerns” about the material used on some of its buildings, though it is different than the type used on Grenfell.

Earlier this week, Secretary of State for Communities and Local Government Sajid Javid revealed that at least 11 other towers throughout England had been clad in combustible material similar to that installed at Grenfell Tower, local media reported.

Nicholas Holgate, chief executive of the Kensington and Chelsea council where the Grenfell Tower is, had come under intense pressure following the blaze.

He has resigned, saying he was forced out by Ms May’s Government.

The fire that engulfed the Grenfell Tower started early in the morning.

The apartment block housed about 600 people in 120 apartments.

Posted on June 28, 2017, in ConspiracyOz Posts. Bookmark the permalink. Leave a comment.