THE cab driver whose exploding fridge is thought to have started the Grenfell Tower inferno said yesterday: “I’m in despair — I knew so many of the dead.”

Finding his kitchen in flames, Behailu Kebede, 44, raised the alarm before watching in horror as the blaze took just moments to streak to the top of the 24-storey block.

He has told pals he is “haunted” by what happened.

One friend told the Mirror: “He’s just thankful he managed to alert his neighbours.

“Behailu contacted the police and told them everything. He is very shocked. He told me he saw smoke and straight away started knocking on the doors of his neighbours.

“He is haunted by what happened.”

His story emerged as harrowing footage revealed the scenes of utter devastation inside Grenfell Tower — and police admitted some victims may never be identified.

Blackened handprints can be seen on stairwell walls where desperate families clambered through thick smoke to try to escape.

And it is feared the death toll from Monday night’s disaster could top 100 as dozens were reported missing on social media. 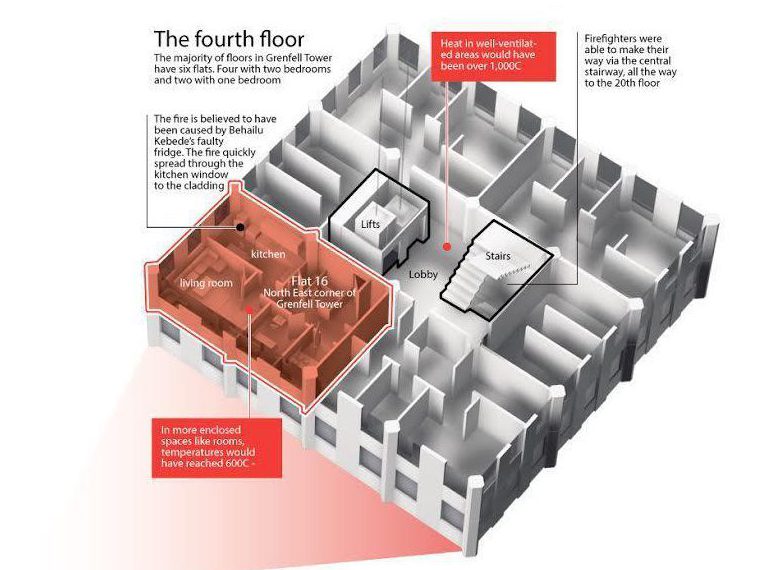 Dad-of-one Behailu was woken by a loud bang as a suspected electrical fault blew up the fridge-freezer in his fourth-floor flat.

He raced out and banged on his neighbour’s door — potentially saving hundreds of lives — as the flames raged out of a window, igniting recently installed cladding covering the entire building.

Last night pals said the Ethiopian, who has lived in the block since arriving as an asylum seeker in the 1990s, was struggling to come to terms with the tragedy.

A friend who spoke to him yesterday morning told The Sun: “He has lived there for years and can’t cope because he knows so many of the dead and missing.

“He spoke about a girl he knew and a black cab driver mate who haven’t been heard of since the fire, then he got very emotional.

“He had no idea the whole block would be destroyed with so many people trapped inside.

“He’s a gentle man with a soft heart. I’ve known him for years and I know this will be tearing him apart.

“He kept repeating over and over again, ‘People have lost their lives, I can’t bear it’.

“He’ll be blaming himself even though there was nothing he could do — and he had no way of knowing the block was a death trap.”

Behailu and his 52-year-old pal were among the first Ethiopians to flee civil strife and take refuge in the UK, forming a tight-knit ­community in North Kensington.

He arrived from the capital Addis Ababa with two younger brothers who were both of school age and moved into the two-bedroomed flat.

His friend said yesterday: “I used to go up to his flat quite often. He was always cheerful and we used to chat over a few beers.

“He always has a smile on his face but he sounded completely ­different this morning.

“He talked about how terrible he feels about the people who lost their lives — some were his friends.

“He will never get over it. He said there was nothing he could do and he went into shock when he saw the flames racing up the side of the building.

“He still can’t believe the small fire in his kitchen caused such ­terrible destruction and killed so many people.”

What we know so far:

Behailu grabbed a bag of belongings before fleeing, believing the fire would be contained in his flat and dealt with by fire crews.

His next-door neighbour Maryann Adam, 41, said: “He knocked on the door and he said there was a fire in his flat.

“It was exactly 12.50am because I was sleeping and it woke me up. When we got up, I saw his luggage outside his flat, there was a big bag with his clothes.

“The fire was small in the kitchen. I could see it because the door was open. There was no alarm.”

Fire crews were alerted at 12.54am and arrived within six minutes but found the inferno had spread outside the building, roaring towards the 24th floor.

Eshete Meried, another friend of Behailu, said: “He is fine but he is not in a position to talk about anything. I understand he is with friends in a temporary shelter.”

Police asked Behailu not to talk about the fire outbreak in his kitchen, his friend said last night.

The pal — who lives in a West London flat close to Grenfell Tower — ­ said: “He said the police have told him not to talk about it but I think he should tell the truth because it wasn’t his fault.

Behailu told The Sun yesterday: “I’m not saying anything. I’m too busy with everything.”

Shocking video footage captured the horrific aftermath of the disaster, showing the block’s charred corridors flooded with water and littered with abandoned belongings.

The clip was shot by father-of-four Hassan Kaissi, 42, who said: “People were screaming. It was unbelievable. I just wanted to help in any way I could.”

Photos taken inside showed blown-out windows and the twisted remains of furniture, washing machines, a cooker and a partially melted fridge-freezer.

Posters appealing for information on the missing have been pinned to lampposts, bus stops and trees by desperate friends and family. Six bodies were recovered yesterday and 11 more were found inside.

But the death toll of 17 was expected to rise “significantly” in the coming days.

Metropolitan Police Commander Stuart Cundy said: “It may be that ultimately some victims remain unidentified. I won’t know that until we’ve gone through the full recovery from Grenfell Tower and we know exactly what we’ve got.

“The full search of that whole building — we could be talking weeks or months.”

The fire burned at more than 1,800F, the same temperature as a cremation. Prolonged exposure to that heat can turn even teeth and bones to ash.

Experts said recovery specialists will be focused on finding surgical implants, jewellery and personal items which may have survived.

Peter Vanezis, Professor of Forensic Sciences at Barts and the London, said: “Identification may take weeks or even months because of the state of some of the remains.

“It will probably be some time before all victims are located due to the sheer difficulty of working in a building which is unsafe. An identification commission is set up to ensure correct identification before victims are released.”

Fire chief Dany Cotton said yesterday: “Tragically, now, we are not expecting to find anyone else alive.

“The severity and the heat will mean it would be an absolute miracle for anyone to be left alive.

“This is a large building, there will be a large amount of building work required internally.

“Before that, specialist dog training teams will go through the building and the surrounding area looking for any identification of people.”

She said “a good half” of the building had yet to be searched in detail.

She added: “It is the upper floors which will be more challenging and will need some additional shoring up for us to be able to get in there.”

Emergency services have also used drones to investigate parts of the building which may be unsafe for people to enter.

Ms Cotton added: “This will be a detailed fingertip search. Obviously this will be a very slow and painstaking process.”

First video from inside Grenfell Tower and adjacent building after inferno

Posted on June 18, 2017, in ConspiracyOz Posts. Bookmark the permalink. 1 Comment.