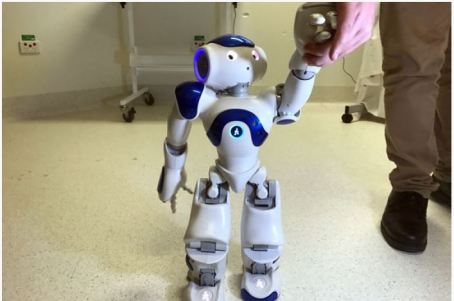 Photo: The robot has been programmed with the basics of medical interaction with patients. (ABC News: Carla Howarth)

Robots have replaced many tasks in modern life, but how would you feel if a humanoid robot took the place of your doctor?

Tasmania’s North-West Regional Hospital is conducting research into whether participants would accept and trust a robot in a care provider role.

About 70 healthcare professionals are posing as patients for the study with the robot dubbed Dr NAO.

Principle researcher Balaji Bikshandi said Dr NAO had been specially programmed to act as a doctor.

“We programmed him to emulate and learn the basics of medical interaction in a short period of time,” Dr Bikshandi said.

“We have made him undergo a medical exam with a patient.”

Dr Bikshandi said the robot asked the participants of the study to do exercises.

It is still early in the trial, but so far Dr NAO is asking patients to do simple tests like breathing and physiotherapy exercises.

“The unique feature of NAO is the ability to show emotion and engage with humans,” he said.

“We’ve asked doctors and nurses to come and interact with him and then evaluate him.”

Photo: Dr Balaji Bikshandi says the project is still in the research phase and robot use is still a long way off. (ABC News: Carla Howarth)

Intensive care nurse unit manager Trudy Segger said the research would give an idea of how a humanoid robot could interact with patients.

“Even though he’s a robot, I’ve bonded with him,” she said.

“They could certainly help us and assist us. We can see lots of potential for use in the clinical setting.

“We’ve got a long way to go but I think he’ll be the way of the future.”

Dr Bikshandi said it could be a while before robots like Dr NAO would complement the role of medical professionals in the workplace.

“Dr NAO is still in the research phase, so I would say we’re looking a few years away at least,” he said.

It is the first time a humanoid robot has been used to support health research in Australia.

Robots are already used in some nursing homes and dementia care facilities in Australia.

Posted on May 10, 2017, in ConspiracyOz Posts. Bookmark the permalink. 1 Comment.