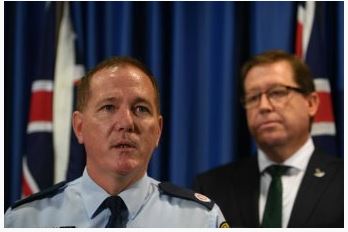 Fixated people driven by extreme political, religious or ideological beliefs who make threats of violence will be the target of a specialist investigations team, New South Wales Police have announced.

Police Commissioner Mick Fuller said the unit would focus on the detection, intervention and prevention of “lone actors” and will be staffed by NSW detectives and mental health experts.

“The unit will investigate individuals who’ve made threats of violence and then determine whether they should be arrested and charged or provided with mental health care,” he said.

“When you look back on an incident, at a certain point in time, somebody knew something, somebody could have done something,” he said.

“But there wasn’t that capacity or understanding from the community or even the courage to nominate, report a person for support for assistance or let the authorities know that there was a role for them to stop them progressing into an act of terrorism.”

Commissioner Fuller said people driven by extremist views who threaten harm represent a real and emerging risk to the community.

But he said people would not be targeted simply because they had a mental illness.

“We need to create a new pathway for people to feel confident they can reach out to the police and have someone come and assist and deal with the family members or the neighbours,” he said.

“We recognise mental health is a part in relation to this and in time, our crime unit and mental health unit will form one important team to try and combat this new phenomenon.”

Mr Fuller denied the new unit was an attempt to pre-empt the findings of the inquest into the Lindt Cafe siege, which are expected any week.

But he conceded Sydney siege gunman Man Haron Monis may have been identified as a genuine risk much earlier if the unit had been operational before the December 2014 attack.

The squad will be staffed by 17 specialist detectives and mental health experts, and will commence operations next week.

Posted on April 30, 2017, in ConspiracyOz Posts. Bookmark the permalink. 1 Comment.