Have the election results been compromised? – ConspiracyOz

Victorians dispute fines for not voting in 2016 local government elections 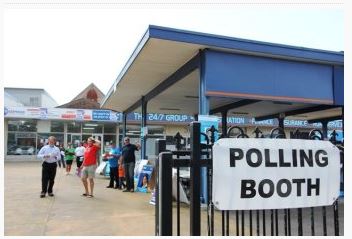 Photo: ABC Radio Melbourne has been inundated by listeners claiming to have voted

Hundreds of people who claim to have voted in last year’s Victorian local government elections have received infringement notices for allegedly having not voted.

Sue Lawrence from the Mornington Peninsula is one of those affected.

She contacted ABC Radio Melbourne earlier this week claiming that she and three family members all submitted postal votes in last year’s election, but have since received infringement notices for not voting.

“Last week when we all received infringement notices of $78 each … I put posts up on social media and within 48 hours I had over 200 people in the same situation on the Peninsula,” Ms Lawrence said.

“Voted in Glen Eira and got fined. We voted. Replied twice now. Not going to pay” — Paul and Annie, St Kilda East

“The electoral offices should issue receipts, how else can we prove we have voted!” — Ian, Mentone

“My son and I have been fined on the Mornington Peninsula too! We were told we have to write a letter now and get a stat dec signed to appeal. My question is how valid is the election result?” — Simone, Somerville

Victorian Electoral Commission (VEC) commissioner Warwick Gately said 30 per cent of electors did not vote in council elections, and last year’s election was no different.

However, he disputed any failings of the VEC.

“We have a very careful look at every circumstance when it comes in to us, particularly at the declarations, at whether it was a postal vote or whether it was an attendance vote, and we don’t send these things out lightly,” he said.

“So if you’ve got an infringement notice, you’ve got it for a reason.”

Mr Gately said the vast amount of complaints about infringement notices had been from postal voters.

“While I note in many cases people did return their postal voting material, if they have received an infringement notice, it is because they have not met the timeline requirements attached to the close of voting, and under state law, are deemed to have not voted,” he said.

Municipal Association of Victoria chief executive Rob Spence said that in previous council elections, the VEC had run the process of the election while local councils managed the fine process.

“There’s been legislative change which has taken the responsibility for collecting the fines to the VEC, and so that’s shifted the way it’s operated,” Mr Spence said.

“Now it operates very much like failure to vote in a state election.”

Have the election results been compromised?

Mr Spence was hesitant when questioned about whether the disputes could have compromised election results.

“Before we can draw any conclusions on that, we need to look at the evidence, in terms of the issues that have been raised with the VEC,” he said.

Posted on April 8, 2017, in ConspiracyOz Posts. Bookmark the permalink. 1 Comment.