Deputy Prime Minister Barnaby Joyce has told landholders in central Queensland he will fight to protect their properties from compulsory acquisition amid a military training ground expansion, but he could not give any guarantees.

The Australian Defence Force (ADF) put about 60 graziers at Shoalwater Bay on notice that they might be forced to sell their land, spanning hundreds of thousands of hectares, north of Rockhampton and west of Townsville.

The ADF wants to expand the Shoalwater Bay and Townsville training areas to cater for larger wargames and an increased number of Singaporean troops training in the region.

AgForce chief executive officer Charles Burke said Mr Joyce would try to convince his federal colleagues that compulsory acquisitions should not be used to expand the Defence training area. 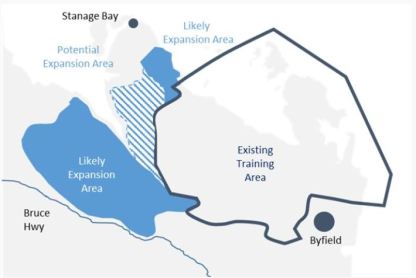 Photo: A map of the proposed Defence expansion area at Shoalwater Bay. (Department of Defence)

Mr Burke said there were still no guarantees, but Mr Joyce had listened to their landholders’ concerns.

“[Mr Joyce] has also given some level of comfort to the people that he — now having understanding of the issue — will take this back to Canberra and certainly push for having compulsory acquisitions taken off the agenda,” Mr Burke said.

Mr Joyce said the Government would “be purchasing property here, but I want it to be between willing sellers and willing buyers”.

“I’ve been through a lot of these fights in so many areas but you go in to bat for them [landholders] on the issues — you can’t win on every issue they want and I never suggested today they ever would,” he said.

“You win on the ones that make the difference and that’s precisely what I’m going to try to do.”

“The Federal Government does not know from one day to one week what’s going on and I think the people deserve certainty,” she said.

Landholders said losing agricultural land would cripple the regional community and many had already lost hope, such as Dale Oliver.

“When you’re left in the middle and all your neighbours — they sell or are acquired — they’re going to have to force you off,” Mr Oliver said.

“[Defence Minister] Marise Payne and I have asked Defence to make sure that they acquire no more land than they need,” he told 2SM radio.

“To look at focusing very much on their needs, and to ensure that acquisitions as far as possible are done consensually, so by agreement — so compulsorily acquisition is a last resort.

“Ideally you want acquisitions of property to be done by agreement and that’s the objective.”

Photo: The expansions will cater for larger wargames and an increased number of Singaporean troops training in the region. (Supplied: Australian Defence Force)

The proposed land acquisitions are the result of a $2.25 billion Defence deal signed with Singapore last year to increase its forces’ military training in Queensland.

Neither Senator Payne nor Mr Turnbull made any mention of land acquisitions, either compulsory or voluntary, when the deal was announced in May, two months before the federal election.

Rockhampton sits in the Liberal National Party’s most marginal electorate, which its candidate Michelle Landry won by a mere 1,111 votes.

Posted on February 6, 2017, in ConspiracyOz Posts. Bookmark the permalink. Leave a comment.