← Another Blackout in Foreign owned Energy S.A.? – ConspiracyOz
Corporate Taxes not Paid by more than a Third of large Companies → 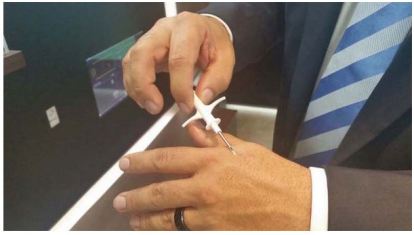 It might sound like something from a dystopian science fiction fantasy but you could soon be able to pay for goods and services with a microchip that is embedded in your hand, according to Etisalat officials.

The UAE telecoms giant unveiled new injectable microchips, which store all your credit card, ID and business card data inside, for the first time in the Middle East at GITEX 2016 in Dubai.

The technique is called bio-hacking, where an alien device is embedded on the back of the hand between the thumb and forefinger using a special syringe, medical tattoo artist Hazim Naori told 7DAYS.

“We clean the skin with sanitiser and after this we put the marks exactly where we want to pierce it,” he said.

“We insert the needle under the skin with a part of the need that pushes it in, and that’s where it settles and it needs a week or two to heal.”

Naori performed the implant for the first time on October 7 on George Held, from Etisalat’s Innovation team.

The procedure sees a microchip embedded into your hand

Speaking about the implantation, he said: “It’s like a piercing, it doesn’t hurt, but it feels a bit uncomfortable for the first day. The bio-hacking improves and enhances your body and will be not just a wearable device, but a device within yourself. You cannot replace or lose it, if you have an accident it’s still with you.”

Held warned, though, that before it can be commercially launched, decisions need to be made on what role it will play in society.

“There is no legality issue here. We already have agreements with Emirates ID and Visa and we issue a credit card with it through Etisalat, we have rights to issue those,” Held explained to 7DAYS.

He revealed that final costs for the procedure are not confirmed yet but it is expected to cost Dhs500 ($100) for both the injection and the gadget itself.

Asked if the information stored on the chip could be hacked with the right equipment, Naori said using the card would still require the necessary authentications.

“We have to internationally agree on the system and this is eventually going to happen, let’s be honest,” said Naori.

“Thirty to 40 years ago there were no (bank) cards and now I have a card with all my ID and sim card on it and put it in the machine without showing anyone my passport.

“It’s an electronic smart gate. It’s the same thing, instead of having the card you just have it under your skin and it verifies you.”

Posted on December 6, 2016, in ConspiracyOz Posts. Bookmark the permalink. 1 Comment.

← Another Blackout in Foreign owned Energy S.A.? – ConspiracyOz
Corporate Taxes not Paid by more than a Third of large Companies →