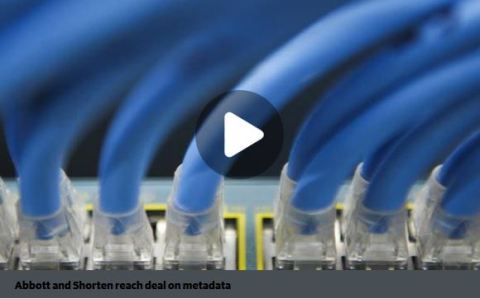 CONTROVERSIAL data retention laws have passed federal parliament’s lower house, but only after the government agreed to a last-minute concession protecting journalists.

MPs on Thursday approved legislation, which requires telecommunications firms to retain customer data for two years, after government amendments negotiated with Labor to secure its passage were finally detailed.

The laws will require spy agencies and police to obtain a warrant to access the metadata of journalists to identify their sources.

As well, a public interest advocate appointed by the prime minister will be able to argue why agencies should not get access.

But he labelled as misguided concerns that access to their data would have a chilling effect on a free press, saying that the work of journalists was just as important to democracy as that of legislators.

“It’s the journalist’s job to protect his or her sources. And they should take every care to do so,” Mr Turnbull told parliament.

Against … The Media, Entertainment and Arts Alliance opposes the data retention laws, and says it has “zero confidence” in the proposed public interest advocate. Picture: Theo Fakos

The union representing journalists says it has zero confidence in the proposed public interest advocate because proceedings would be conducted in secret behind closed doors.

Media outlets would not be told about applications for data or when authorities have access to the data of journalists.

“If the warrant system is going to have any credibility at all it’s got to be contestable in court,” Media Entertainment and Arts Alliance chief Paul Murphy said.

Prime Minister Tony Abbott told parliament that 90 per cent of counterterrorism and child abuse investigations involved the use of metadata.

The government hopes to get its legislation through the Senate by the end of next week.

Several Labor MPs voiced concerns about the scope and breadth of the planned powers, even as their party backed the draft laws.

Mr Husic made a last-minute plea on behalf of smaller telcos forced to bear the costs of retention.

Opposed … Only Greens MP Adam Bandt and independents Cathy McGowan and Andrew Wilkie voted against the legislation when it was put to a vote just before question time. Picture: News Corp Australia

Other backbenchers voiced concerns the data could be stored overseas, potentially undermining confidence in the laws.

Senior Labor figures moved to quell fears that new powers were being mandated.

Only Greens MP Adam Bandt and independents Cathy McGowan and Andrew Wilkie voted against the legislation when it was put to a vote just before question time.

Mr Bandt said it was appalling significant powers were being rushed through parliament, criticising the short length of time MPs were given to consider amendments.

“Labor may be prepared to roll over as long as Tony Abbott tickles their tummy, but the Greens aren’t,” he told reporters.