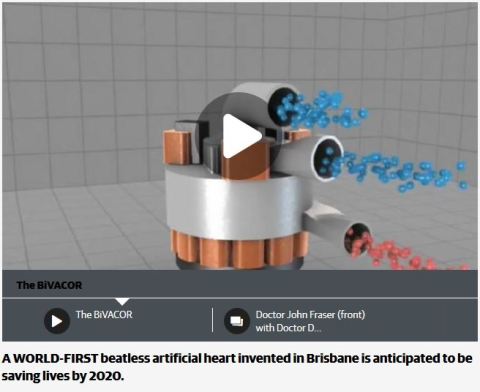 A WORLD-FIRST beatless artificial heart invented in Brisbane is anticipated to be saving lives by 2020.

But first the device — which is similar to a pool pump — needs to pass rigorous tests, which costs millions of dollars.

Today Brisbane’s Prince Charles Hospital (PCH) Foundation kicked off an appeal to raise $5 million needed to ready the heart for human trials by 2018.

Speaking at the launch of the appeal, called The Common Good, cardiac expert John Fraser said the pump was a blend of medicine and engineering brilliance.

“We are taking-on evolution, we have never had anyone alive without a pulse and a lot of people thought that could never be done,” he said

“Evolution developed us with a pulse but we don’t need one.

“There have been devices before that support one side of the heart … where you don’t have a pulse, but this is something that can entirely replace the heart. This could go for . 20 years.”

Professor Fraser said the electrically-powered pump would save patients suffering from heart failure, the largest killer in the 21st century.

The development team are aiming to get the device ready to be implanted in heart failure sufferers as an alternative to donor hearts, which are in short supply.

“I see patients die … for lack of a heart, (I see) 30 year olds 40 year olds, you cannot have (spare hearts) on a shelf … (this device) it can give them their life back,” Professor Fraser said.

It was invented by Brisbane engineer Daniel Timms in 2001 when his father Gary was dying of heart failure.

Timms used the know-how his father, a plumber, had taught him, along with what he learnt during his PhD in engineering at Queensland University of Technology.

Professor Fraser said the work done so far was mostly funded by a passionate group of doctors and engineers who had received a small amount from the PCH Foundation.

“Most of the work we have done on the BiVACOR device has been basically done for nothing. We have slept in our lab many times, there have been times there have been no wages,” he said.

One of the largest donors so far is a Texas furniture salesman Jim “Mattress Mack” McIngvale, who gave $2.5 million.

Professor Fraser says he has also approached some of Australia’s richest people and various levels of government, receiving $2.5 million from the Federally-funded National Health and Medical Research Council.

“We have spoken to a lot of these (wealthy) people … and venture capital. We have contacted (Bill) Gates,” he said.

So far Gates and other rich-listers haven’t reached for their cheque books.

“We can’t just leave this to one or two (wealthy) individuals to (donate),” he said.

Professor Fraser said in the future the technology may be commercialised by floating a company on the Australian Securities Exchange.

And it was too early to say how much the final device would cost to buy.

“We are not there yet. I need to be comfortable to put the device in my mum,” he said.

The device has been successfully tested on sheep and cows, who have been kept alive in a laboratory for up to 50 days until they are euthanased.

“People have been looking at artificial heart technology … since the late 1960s,” Professor Fraser said.

“Everything that is good takes time and takes work, but if the community can get behind it the doctors and engineers can do their work.”

Posted on March 7, 2015, in ConspiracyOz Posts and tagged artificial heart. Bookmark the permalink. Leave a comment.