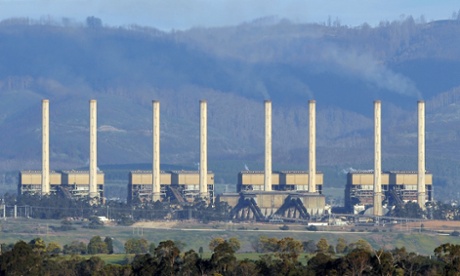 Smoke billows from the Hazelwood power station in the Latrobe Valley.

The Coalition’s Direct Action plan will pay polluters to reduce their emissions.
The Coalition’s $2.5bn “Direct Action” climate policy appears likely to pass the Senate after the environment minister, Greg Hunt, agreed to minor amendments, but doubts remain about whether it can achieve Australia’s 2020 emission reduction target and pave the way for deeper long-term cuts.

The government has agreed to independent senator Nick Xenophon’s demand it move quickly to set up a “safeguards” scheme to impose penalties on companies that increase their greenhouse emissions – but has not committed to any detail.

It has rejected Xenophon’s push to allow the government purchase international carbon permits, something the prime minister once described as sending “money … offshore into dodgy carbon farms in Equatorial Guinea and Kazakhstan”, even though this would have made it easier and cheaper to reach Australia’s agreed emissions reduction target.

The government also agreed to get the Climate Change Authority – which it was once committed to abolish – to investigate the Palmer United party’s idea of a dormant emissions trading scheme, which would be activated when major trading parties had equivalent policies – with the CCA to report to the parliament.

Under Direct Action the government will commit $2.5bn over four years for competitive grants to companies or organisations that volunteer to reduce their emissions.

It had proposed to defer for a year any consideration of a so-called “safeguards” mechanism to impose some upper limit on emissions across the board – including on companies or sectors not bidding in its auction – so that their increasing emissions do not cancel out the decreases in emissions purchased through the government fund.

Xenophon has insisted the government set up these “safeguards” straight away, but has left it up to Hunt to determine how a company’s emission “baseline” should be calculated, and what penalties should apply if it is exceeded.

As revealed by Guardian Australia in August, former Australian Conservation Foundation head Don Henry and co-chair of Greg Hunt’s own expert committee on Direct Action, Danny Price, have been involved in months of backroom talks to win the backing of PUP, Xenophon and DLP senator John Madigan during the three months since the government succeeded in repealing the former government’s carbon pricing scheme.

Xenophon told Guardian Australia last week his amendments to the “safeguard mechanism” were about making sure the government got value for money, but could be “a building block to a baseline and credit-style emissions trading scheme down the track”.

“It could evolve into that,” he said, “but the amendments don’t do that as they stand.”

The deal, which was still being finalised Wednesday after delicate negotiations, would be a major achievement for Hunt.

But deep concerns about the adequacy of the policy remain. The government has not modelled whether the fund has enough money to meet Australia’s minimum 2020 target to reduce emissions by 5%, with Abbott saying during the election campaign he preferred to just “have a crack”.

But Modelling by Reputex climate analytics, commissioned by the environment group WWF-Australia, found it was likely to fall short by $5.9bn a year between 2015 and 2020, or between $20bn and $35bn in total. Separate Modeling by Sinclair Knight Merz/MMA and Monash University’s Centre of Policy Studies, commissioned by the Climate Institute, which used assumptions more generous to the Coalition, found it would need at least another $4bn. Abbott has said if Direct Action falls short he will not allocate any more money.

Declining electricity demand is likely to have made the 2020 target somewhat easier to achieve, but many observers, including Coalition frontbencher Malcolm Turnbull, have also warned its costs could become prohibitive when Australia faces deeper greenhouse gas cuts after 2020, especially without the option of buying offshore carbon permits.

In a 2010 speech after he was deposed as leader, Turnbull said direct-action style schemes were “a recipe for fiscal recklessness on a grand scale” and “schemes where bureaucrats and politicians pick technologies and winners, doling out billions of taxpayers’ dollars, neither are economically efficient nor will be environmentally effective”.

And the “blue book” prepared by the Treasury for a possible incoming Coalition government in 2010 said “a market mechanism can achieve the necessary abatement at a cost per tonne of emissions that is far lower than alternative direct-action policies”.