You Thought ‘The Cloud’ Was Safe? – ConspiracyOz

Hundreds of nude, semi-nude, and revealing pictures of female celebrities were leaked overnight after being stolen from their private collections. Hunger Games actress Jennifer Lawrence, Kirsten Dunst, and pop star Ariana Grande were among the celebrities apparently shown in the pictures, which were posted on infamous web forum 4chan.

It’s unclear how the images were obtained, but anonymous 4chan users said that they were taken from celebrities’ iCloud accounts. The accounts are designed to allow iPhone, iPad, and Mac users to synchronize images, settings, calendar information, and other data between devices, but the service has been criticized for being unreliable and confusing. Earlier this year, Jennifer Lawrence herself complained about the service in an interview with MTV. 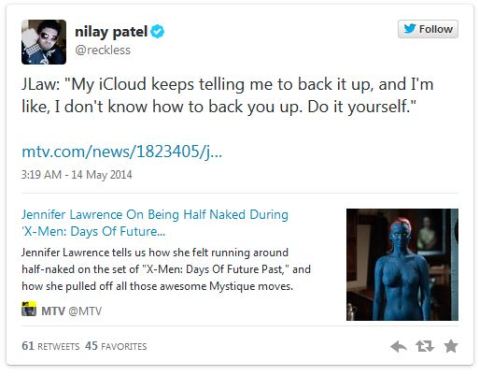 It’s also unclear for how long the hackers had been building their collection of images before posting. Mary Elizabeth Winstead, star of Scott Pilgrim vs. the World and one of the celebrities whose pictures were posted, said the images were taken and deleted years ago, suggesting her pictures were either still available in cloud storage, or were grabbed at the time.

Gawker reports the huge leak was teased earlier this week when an anonymous user suggested that they had access to a cache of celebrities’ personal photos.The user that claimed responsibility for the hack indicated that more pictures and videos of the celebrities were available, but requested both Bitcoin and monetary donations to a PayPal account before the stolen images and videos were posted. Gawker also says that gossip site TMZ was attempting to purchase the images prior to their posting online, with the 4chan user saying “I’d rather you get them than TMZ” in a bid to spur donations from other forum users.

Many of the images are reportedly forgeries: a spokesperson for Ariana Grande said that the photos are “completely fake,” while Victoria Justice took to Twitter to refute claims that the pictures were of her.

These so called nudes of me are FAKE people. Let me nip this in the bud right now. *pun intended*

But other celebrity victims of the hack have confirmed that the pictures are real. Mary Elizabeth Winstead tweeted that she could “only imagine the creepy effort that went into” the breach, and a spokesperson for Jennifer Lawrence released a statement to BuzzFeed in which they called the leak “a flagrant violation of privacy.”

Lawrence’s spokesperson also said that anyone posting the stolen pictures will be prosecuted by relevant authorities. The spokesperson didn’t clarify what legal ramifications people sharing the picture would face, but Mashable reports a number of Twitter accounts posting uncensored pictures of the victims of the hack have already been suspended. Harsher punishments likely await the person responsible for leaking the pictures — in 2012, a man was sentenced to 10 years in prison for hacking the private email accounts of celebrities including Mila Kunis and Scarlett Johansson.

Posted on September 2, 2014, in ConspiracyOz Posts. Bookmark the permalink. 2 Comments.