BRISBANE residents could be corralled inside their homes and barricaded out of their properties during the G20.

The unprecedented security arrangements will keep road closures secret and effectively trap people from moving around the city.

Residents will learn of closures only a short time before and will not be allowed to leave or enter their properties inside the “declared area” except in an emergency.

Roads could be closed in the CBD, Spring Hill, South Brisbane, Kangaroo Point, Fortitude Valley, Bowen Hills, Petrie Terrace and Milton as the world leaders travel in motorcades to and from the summit precinct.

Tens of thousands of residents live inside the “declared area”.

Police won’t reveal which roads will be closed because details of motorcade routes are kept top secret until the last minute.

The only clues residents will have will be a large police presence in the street beforehand and details posted on a police website.

The “declared areas” will be flooded with G20 police up to 10 days out from the summit which begins on November 14.

The officer-in-charge of G20 planning has revealed thousands of police will be “saturating’’ a 30km stretch in the “biggest security operation ever launched” in the city. 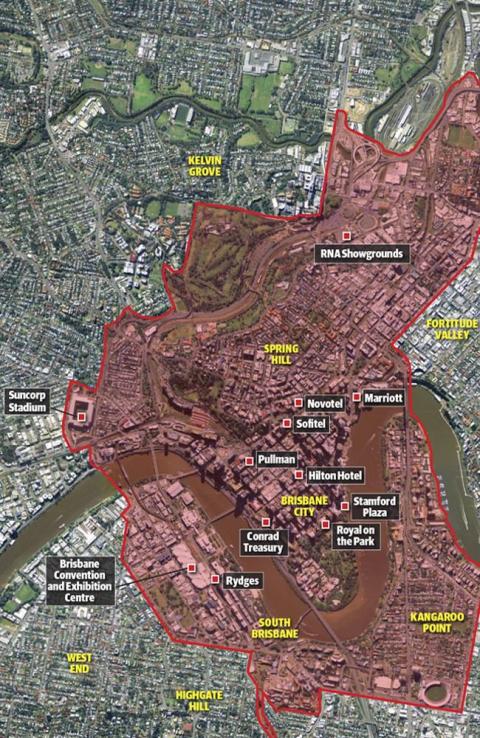 The “Red Zone” that will be locked down for November’s G20 summit in Brisbane.

“We will put as many police in uniform as possible into that area in the leadup to G20,’’ Assistant Commissioner Katarina Carroll said.

“They will be patrolling things like railway lines, just checking out who or what might be on our radar at the time.

“We will have to shut down segments of roads for the motorcades.

“Depending on the arrival times of the leaders, the roads could be closed for up to an hour at a time, and will reopen once we’ve moved the leaders on.”

The height of the restriction will likely come on the evening of November 13, the night before the official beginning of the meeting.

On that day, authorities will wait for peak hour traffic to clear before transforming parts of the inner city into mini-fortresses.

From about 8pm, barriers will start going up around 12 “restricted areas’’ including the summit’s epicentre,

the Brisbane Convention and Entertainment Centre, and the hotels hosting the world leaders and their delegations.

The no-go zones will be patrolled by hundreds of crack police, who’ll be rostered on around the clock.

The massive lockdown will result in disruptions to the CBD and South Bank precinct.

“There will definitely be an impact because of the security measures, but that can’t be avoided,’’ said Assistant Commissioner Carroll.

“We are going to do everything possible to minimise the disruption, particularly around the venues.’’

She said police were working with protest groups.

“But if we receive intelligence that there is going to be violent protest or the threat level changes, well that is a whole new ball game,’’ she warned.

Assistant Commissioner Carroll said about 3km of fencing would be put around the convention centre at South Brisbane in the lead-up the event,

As well as traffic problems, taxi ranks and bus stops will move while the South Brisbane train station will close and some footpaths will be blocked.

“I want to encourage everyone to go about their usual business, but people will need to go about that business in a much different way,’’ Assistant Commissioner Carroll said.

“The greatest disruption to transport arrangements will be between Friday, November 14 and Sunday the 16th.”

She said exact changes won’t be known until about six weeks before the summit.

Posted on July 12, 2014, in ConspiracyOz Posts. Bookmark the permalink. Leave a comment.