Tony Abbott and Shinzo Abe have strengthen ties at a dinner in Perth following a mine tour at the Pilbara.

CANADIAN Prime Minister Stephen Harper better watch his back; Tony Abbott’s blossoming bromance with Japanese leader Shinzo Abe is threatening to overthrow the Commonwealth leader’s BFF status with our man Down Under.

Abbott was acting as tour guide while the Japanese Prime Minister was in town to sign a historic free trade agreement with Australia that could see prices fall on everything from electronics to sake.

The unlikely pair certainly hit it off, giggling over glasses of West Australian wine, getting sloppy on sake and bonding at Australia’s beautiful backdrops.

Abbott ‘worse for wear’ after night with Japanese PM

But this cringe-worthy corker posted by the PM last night has yet another Abbott embarrassment written all over it.

PM Abe wearing his gift from Australia – RM Williams boots. Both proud to be wearing them today #RMs pic.twitter.com/fxjyrSNNQz 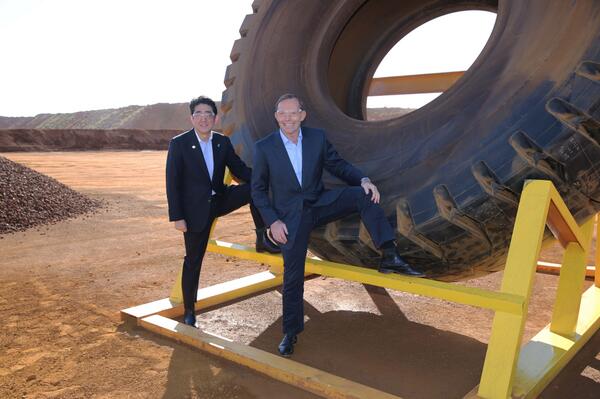 And what better way than to part ways than with a gift of RM Williams boots, all the while atop a monstrous Komatsu 930E hauling truck tyre?

Abbott and Abe pose next to a haulage truck tyre during a tour of Rio Tinto’s West Angelas iron ore mine in Pilbara, Western Australia. Picture: Alan Porritt. Source: AFP

“Why is this strange awkward man making me do this” RT @TonyAbbottMHR: PM Abe wearing his gift – RM Williams boots

The gift follows a long list of traditionally embarrassing gift blunders; most recently when Mr Abbott gifted President Barack Obama with a … surfboard.

But perhaps the most cringe-worthy gift is when former Prime Minister Julia Gillard gave Mr Obama … a green and white 2GB iPod Shuffle.

Posted on July 10, 2014, in ConspiracyOz Posts. Bookmark the permalink. Leave a comment.