How many jobs will go after Holden stops making cars in Australia? 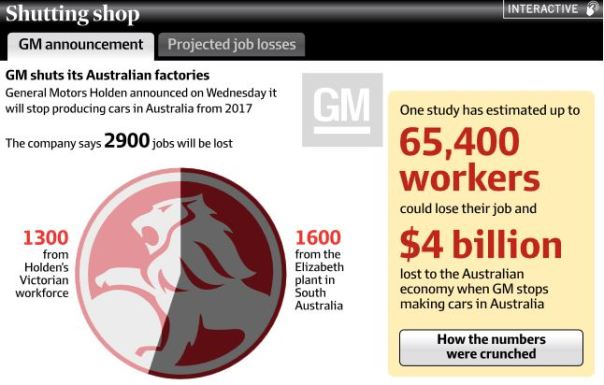 InteractiveAs many as 65,000 workers could lose their jobs and up to $4 billion could be lost from the economy as a result of General Motors pulling the plug on Holden manufacturing in Australia, under one scenario put forward by economic modellers.

The modelling, from the National Institute for Economic and Industry Research, includes estimated job losses at companies within the GM supply chain and the flow-through effects of the change on spending by all the workers involved.

It assumes that the GM closure will be offset by growth in other sectors, but does not consider what benefits would have arisen from the redirection of government subsidies, or what it would take to keep GM manufacturing in Australia.

Holden managing director Mike Devereux on Wednesday announced the car maker would be leaving Australia at the end of 2017, after a row with the federal government over subsidies.

The analysis was commissioned by Barry Burgan and John Spoehr from the University of Adelaide to validate their economic modelling of the impact of closing the GM plant in Elizabeth, South Australia.

In that detailed assessment, released last month, the researchers estimated that the loss of GM’s Elizabeth plant could mean up to 13,200 lost jobs and $1.24 billion lost in gross state revenue for South Australia.

The model produces a more dire picture than the national modelling as it makes different assumptions about the “additional lost value” that the closure of the GM plant will have, due to “a tipping point effect, resulting in the closure of businesses that are heavily, but not solely, reliant on GMH (General Motors Holden)”.

The University of Adelaide researchers walk through their complex assumptions about the number of job losses that would result from closing the GM plant in their state.

They begin with the 1750 GM workers at the plant losing their jobs and add in another 4000 job losses from suppliers who predominately deal with the company.

The authors then estimate another 3400 workers would lose their jobs from “second-tier” companies involved in the GM supply chain.

Finally, they estimate that another 4100 jobs would be lost due to reduced consumption from all the workers from the first two groups who cannot find new jobs, or who reduce their spending as a result of the plants shutting.

“I was very surprised about how substantial the national impact of any closure might be and it is clear that this is a national crisis, not just a South Australian crisis, and requires a very substantial national response,” Associate Professor Spoehr said.

“This may involve an assistance package to support the companies affected and help them diversify into alterative (work).

“The closure of Holden has (particularly) implications for parts of Adelaide as well as Victoria, such are the deep roots of the auto industry in those economies.”

But he warned that, like all economic modelling, the work is based on a series of assumptions and simplifications.

“All economic models are based on assumptions that change depending on policy responses to the crisis. What will affect the outcome is the response that the federal government makes to this crisis.”

Posted on December 13, 2013, in ConspiracyOz Posts. Bookmark the permalink. 1 Comment.