← World War 3 and Global Smart ID; wising up to the plans of Big Brother
More On The Dole Cue? Or More For Tony Abbotts ‘Green Army’- ConspiracyOz →

OMG This was in The Telegraph (Truth) – ConspiracyOz

Report gives the truth about climate at last 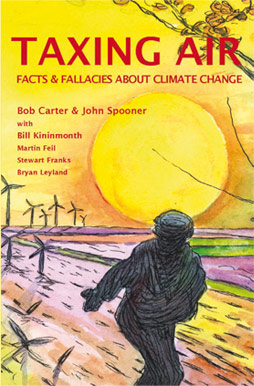 THE issue under public discussion is that human-related carbon dioxide emissions are causing, or will cause, dangerous global warming.

The issue is not “is climate change happening”, for it always is and always has. Nor is it about whether carbon dioxide is a greenhouse gas or not, because all scientists agree that it is.

Rather, the key question concerns the magnitude of warming caused by the rather small 7 billion tonnes of industrial carbon dioxide that enter the atmosphere each year, compared with the natural flows from land and sea of over 200 billion tonnes.

Despite well over twenty years of study by thousands of scientists, and the expenditure of more than $100 billion in research money, an accurate quantitative answer to this question remains unknown.

Scientists who advise the United Nations (UN) Intergovernmental Panel on Climate Change (IPCC) worry that a doubling of carbon dioxide over pre-industrial levels will cause warming of between 3 and 6 deg. Celsius, whereas independent scientists calculate that the warming for a doubling will be much less – somewhere between about 0.3 and 1.2 deg. Celsius.

Importantly, no global warming has now occurred since 1997, despite an increase of atmospheric carbon dioxide of 8%, which in turn represents 34% of all the extra human-related carbon dioxide contributed since the industrial revolution.

Few of these facts are new, yet until recently the public have been relentlessly misinformed that human-caused global warming was causing polar bears to die out, more and more intense storms, droughts and floods to occur, the monsoons to fail, sea-level rise to accelerate, ice to melt at unnatural rates, that late 20th century temperature was warmer than ever before and that speculative computer models could predict the temperature accurately one hundred years into the future.

It now turns out that not one of these assertions is true. So who has been telling us these scientific whoppers?

The United Nations, that’s who; which is not surprising given that global warming long ago gained a life of its own as a mainstream political issue, quite divorced from empirical science – politics, of course, being what the UN is all about.

The IPCC has been charged with providing advice about global warming since 1988, publishing four major summaries of the scientific literature in 1990, 1995, 2001 and 2007 and with a 5th Assessment Report due on September 27th. Press coverage indicates that this report will concede that many of the environmental threats attributed to global warming by the IPCC have hitherto been exaggerated.

Meanwhile, and starting in 2003, a new independent team of scientists has been on the climate job, drawn from universities and institutes around the world and called the Non-governmental International Panel on Climate Change (NIPCC).

In classic Green Team: Red Team tactical management style, the NIPCC has the role of providing an alternative Red Team view of the science of global warming, acting as a sort of “defense counsel” to verify and counter the arguments mounted for climate alarm by the IPCC’s Green Team prosecution.

The report summarises many of the thousands of scientific papers that contain evidence conflicting with the idea of dangerous human-caused warming. Considered collectively, the research literature summarised by the NIPCC shows that modern climate is jogging along well within the bounds of previous natural variation.

Faced with this reality check, it is not surprising that the UN apparently intends to tone down some of its earlier over-alarmist rhetoric.

Nonetheless, it remains the case that extreme natural climate events can cause great damage to both human communities and the environment. The task ahead, therefore, is to fashion a national climate policy that prepares for and adapts to all dangerous climate events, whenever they occur and of whatever origin.

Posted on September 18, 2013, in ConspiracyOz Posts. Bookmark the permalink. 4 Comments.

← World War 3 and Global Smart ID; wising up to the plans of Big Brother
More On The Dole Cue? Or More For Tony Abbotts ‘Green Army’- ConspiracyOz →