Gillard government moves to set up Orwellian Ministry of Truth 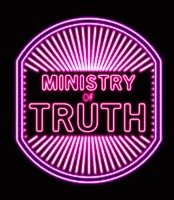 In George Orwell’s novel Nineteen Eighty-Four, the Ministry of Truth is the government propaganda ministry. The word “truth” here is a paradox as one of it’s roles was to falsify historical records so that should there be any doubt as to what “really” happened, the “historical” records would reflect it. As well as administering truth, the administration deploys a new tongue-in-cheek language amongst administrators called Newspeak.

The term Public Interest Media Advocate which sounds like something right out of the Orwellian novel Published in 1949 is actually a proposed job title included in a bill recently put forward by Senator Stephen Conroy, the federal communications minister.

The Bill includes a public interest test for media mergers and a toughened self-regulation system for print and online news media and is backed by the Public Interest Media Advocate which would rule on proposed media mergers and oversee the operation of the Australian Press Council in enforcing media standards.

So what exactly does this Newspeak mean? And why are the mainstream media outlets slamming the Gillard government over this draconian legislation?

Here’s what www.freespeechaustralia.com had to say about it…

The Gillard Government has announced its response to the Finkelstein report and it is an unprecedented and historic attack on freedom of speech.

It calls for the creation of a new media censorship and licensing scheme, but the start of “government sanctioned journalism”.

Outside of wartime, no Australian Government has ever come even close to considering restrictions of this magnitude. Together with upcoming changes to our “anti-discrimination laws”, if passed, they represent an end to freedom of speech as we know it.

There are three main parts to this proposal. Each of them is bad on its own, but together, they spell disaster.

First: It sets up a licensing scheme, granting basic journalistic rights and protections only to those who sign up to a “regulated press standards body”. Those who sign up will be rewarded by the government, through things such as “exemptions from privacy legislation”. Those who don’t will lose these same protections “vital to the capacity of journalists to do their job”.

Second: These bodies will be overseen by a powerful taxpayer-funded super-regulator: the Orwellian “Public Interest Media Advocate”. Whose interest do you think this government-appointed super-regulator will really be advocating? (hint: it won’t be the publics).

But that’s not all.

In a further attack on democracy, Senator Conroy will be presenting the Bill to Parliament on Thursday – and is demanding it be passed next week. That’s right: no time for scrutiny, no time for debate, no time for MP’s to even thoroughly read or understand the bill. Sound familiar?

That’s pretty frightening when you think about it. Globally there has been an uprising of independent media organisations, websites, radio stations and more over the past few years. Including this one. The freedom to keep the checks and balances of mainstream media and be critical of our government must not be allowed to be taken away. This legislation sets up the framework and opens the door to further censorship down the road.

Whomever is behind this is playing a mean game of chess. Thinking 3 moves ahead, positioning the pieces and slowly taking our pieces off the board. That’s what mainstream media isn’t reporting on here. They couldn’t care less about having what they say controlled by a government body. The 2 big media companies, News Ltd and Fairfax, are only making a big deal of this because it affects how they do business. The PIMA would have responsibilities such as ensuring media mergers and acquisitions don’t reduce diversity which is exactly where it affects these media giants.

No government tables this type of legislation without good reason. Even if this Bill doesn’t make it through to become law, the way it’s being rushed through leads us to believe that it’s not the last we’ll see of legislation of this type.

Slowly we begin to see the pieces being moved into position on the board. Is it coincidental that this legislation is right in line with the upcoming National Broadband Network (NBN)? Doubtful.

There is a massive trend by the big media companies to phase out print media and push it all into the digital realm. The government knows the NBN will Marshall in a new era of digital communication in Australia. And they want total control of it from the start. That’s what this is really about. Welcome to the Ministry of Truth.

Posted on March 14, 2013, in ConspiracyOz Posts. Bookmark the permalink. 1 Comment.