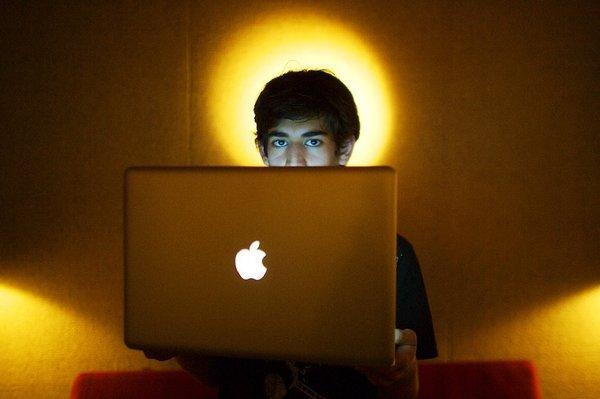 Internet activist Aaron Swartz killed himself Friday. His suicide has stoked a politically malignant aftermath for the prosecutors pursuing 13 felony charges against him in a trial that was set to begin in a month. (Michael Francis McElroy / January 30, 2009)

Aaron Swartz’s legacy was already guaranteed, even at 26: He helped create Reddit and RSS, which distributes content over the Internet.

But his suicide by hanging Friday has also stoked a politically malignant aftermath for the prosecutors pursuing 13 felony charges against him in a trial that was set to begin in a month.

Swartz, an open-Internet advocate who had struggled with depression, was facing decades of prison time and charges that included wire fraud for downloading millions of articles from JSTOR, a

Swartz’s death also came days after JSTOR announced that it was releasing 4.5 million articles to the public, free for use.

Some academics said Sunday they planned to post other copyrighted articles online — one of the many digital memorials circulating online as Webgoers mourned and assessed the life of a popular and influential activist.

“There’s no doubt in my mind that depression was a factor,” wrote Microsoft researcher and NYU professor Danah Boyd in a Sunday blog post. “I adored Aaron because he was an emotional whirlwind – a cranky bastard and a manic savant…. He had an intellectual range that awed me and a kitten’s sense of curiosity. But when he was feeling destructive, he used his astute understandings of people to find their weak spots and poke them where it hurt.”

But criticism, including Boyd’s, focused much more intensely on the government for its hard pursuit of Swartz. In a Saturday statement, Swartz’s family and girlfriend partially blamed his suicide as “the product of a criminal justice system rife with intimidation and prosecutorial overreach,” a charge widely echoed among supporters.

“We want to respect the privacy of the family and do not feel it is appropriate to comment on the case at this time,” Christina DiIorio-Sterling, spokesman for the U.S. attorney’s office, said in an email to the Los Angeles Times on Sunday when asked for reaction to the family’s comments.

“From the beginning, the government worked as hard as it could to characterize what Aaron did in the most extreme and absurd way,” Lessig wrote. “The ‘property’ Aaron had ‘stolen,’ we were told, was worth ‘millions of dollars’ — with the hint, and then the suggestion, that his aim must have been to profit from his crime. But anyone who says that there is money to be made in a stash of ACADEMIC ARTICLES is either an idiot or a liar.”

Lessig added, “Somehow, we need to get beyond the ‘I’m right so I’m right to nuke you’ ethics that dominates our time.”

In a news release announcing Swartz’s indictment in July 2011, U.S. Atty. Ortiz had previously said, “Stealing is stealing whether you use a computer command or a crowbar, and whether you take documents, data or dollars. It is equally harmful to the victim whether you sell what you have stolen or give it away.”

The indictment said Swartz broke into a wiring closet at MIT, where he was not enrolled or on staff, to hack its network for the JSTOR articles, which officials said he then planned to give away on file-sharing networks. MIT did not object to the prosecution.

“It pains me to think that MIT played any role in a series of events that have ended in tragedy,” Reif wrote in the statement, obtained by the Los Angeles Times. He added that he had asked Hal Abelson, a computer science professor at the school, to conduct a review.

“I have asked that this analysis describe the options MIT had and the decisions MIT made, in order to understand and to learn from the actions MIT took,” Reif said. “I will share the report with the MIT community when I receive it.”

A search of Swartz’s prolific blog and Twitter account did not turn up any relevant references to JSTOR. In one September 2009 post titled “Honest Theft”, Swartz defended students sleeping on MIT grounds to save money, writing in a typically egalitarian vein: “MIT receives enormous sums from the wealthy and powerful, more than they know how to spend. Much of it gets spent on unneeded luxuries for their already-elite students. Redistributing it to the town’s poorer residents seems potentially justified.” Elsewhere, Swartz had criticized academics as out of touch.

In the evolving debate around copyright and intellectual property, which has accelerated with the popularity of the Internet — and the open-source, free-for-all sharing culture that grew with it — academic articles have occupied a symbolic place in the contemporary debate: Such articles are often written by academics at taxpayer-funded public universities, but hidden behind expensive paywalls, which means access is often exclusive to schools or libraries.

“The case is one that we ourselves had regretted being drawn into from the outset, since JSTOR’s mission is to foster widespread access to the world’s body of scholarly knowledge,” the academic service said in a statement Saturday. “At the same time, as one of the largest archives of scholarly literature in the world, we must be careful stewards of the information entrusted to us by the owners and creators of that content. To that end, Aaron returned the data he had in his possession and JSTOR settled any civil claims we might have had against him in June 2011.”

In a Saturday blog post, Alex Stamos, an executive with Artemis Internet, an online security firm, said he was planning to testify as an expert witness for Swartz in his upcoming trial and laid out Swartz’s defense, in which he argued for leniency rather than total innocence.

“If I had taken the stand as planned and had been asked by the prosecutor whether Aaron’s actions were ‘wrong,’ I would probably have replied that what Aaron did would better be described as ‘inconsiderate,’ ” Stamos wrote. “In the same way it is inconsiderate to write a check at the supermarket while a dozen people queue up behind you or to check out every book at the library needed for a History 101 paper.”

Stamos added, “It is inconsiderate to download lots of files on shared WiFi or to spider Wikipedia too quickly, but none of these actions should lead to a young person being hounded for years and haunted by the possibility of a 35-year sentence.”

Posted on January 14, 2013, in ConspiracyOz Posts. Bookmark the permalink. Leave a comment.